The History and Significance of Poson Poya

The month of June is known as Poson in Sinhala. The Poya day is known as the Poson Poya and is celebrated by Buddhists across the world to mark two very significant events in history of Buddhism. The Third Buddhist Council was held on this day in Pataliputra (now Patna) in India and the arrival of Arahath Mahinda to Sri Lanka.

Since the Emperor Ashoka lavishly provided with requisites to Buddhist monks after he became a Buddhist, many unworthy men, holding heretical or wrong views infiltrated as Buddhist monks. Consequently, there were conflicting views about Dhamma and disputes among Sangha. Under the patronage of Emperor Dharmashoka and the leadership of Arahant Moggaliputtatissa Thero, those who held wrong views were expelled from the Sangha and the Third Buddhist Council was held in order to purify the Buddhist canon to ensure that the original teaching of the Buddha is preserved. 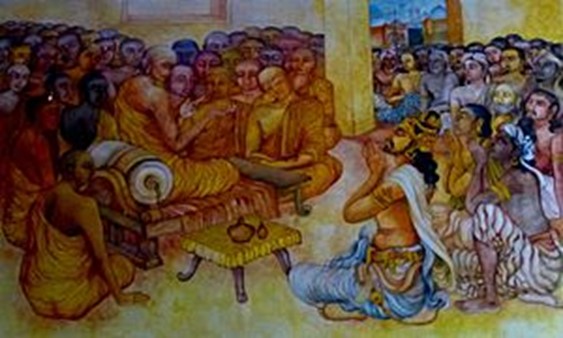 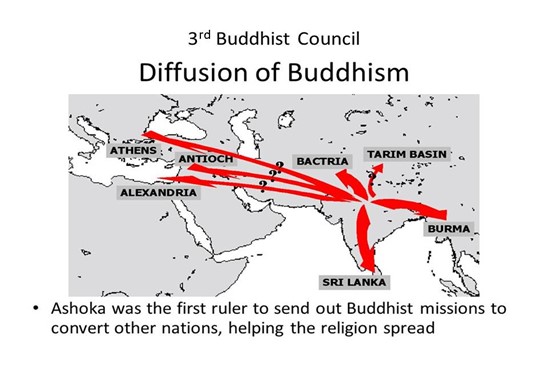 Another key decision was to identify ‘Abidamma’ (‘Higher Doctrine’ or Buddhist Psychology) as a separate basket to make it Tripitakaya, the “Three Baskets”- the Sutta Piṭaka, the Vinaya Piṭaka and the Abhidhamma Piṭak)  the  sacred book of Buddhism. Thirdly, the Council decided to disseminate the Buddha’s teachings to neighbouring countries and nine missionaries were sent to various regions. Therefore, the Poson poya Day is the beginning of Buddhism to be a world religion.

One of the missionaries was to Sri Lanka which was the most successful mission. Thus on the full-moon day of the month of June, Buddhism was introduced to Sri Lanka in the year 236 B.E. by Emperor Asoka’s son Arahath Mahinda Thera. Arahath Mahinda Thera visited the island with four other Arahath Theras namely, Ittiya, Uttiya, Sambala, Badesala, Sumena ‘Samenera’ (a novice male monastic) and Anāgāmī (‘Non-returner’) included Banduka Upaseka, a lay disciple to dignify that they are ordinary people.

The very first meeting of Mahinda Thera and the King Devanampiyattissa took place in “Missaka Pauwa”, today known as Mihintale considered as the cradle of Buddhism in Sri Lanka.

The King Devanampiyattisa was very fond of hunting.  It was the time of a national carnival; The King Devanapiyatissa went on a hunting spree accompanied by his group. The King went deep into the wilderness alone, and suddenly, the King saw a deer browsing among the trees. Being a very skilful person for this sport, the King quickly snapped his bow at the deer. The deer darted off.

At the same time he heard someone calling his name “Tissa, Tissa”.  The King was alarmed than surprised and looked in that direction. He knew that there was none on the earth who would address him by his first name.  To his utter amazement he saw an unfamiliar figure standing on the top of the rock, clad in yellow robes.  Upon meeting the shaven-headed monks, Devanampiyatissa was taken aback by their appearance and asked who they were. The King was furious. He asked in rage “Who are you with shaven head and clad in tattered yellow robe, to call a King like me by his first name?” 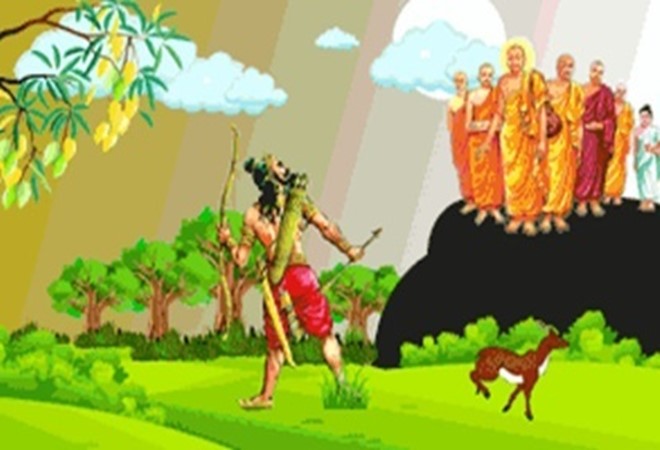 Mahinda Maha Thera, while producing the other companions who came with him calmly replied, “We are recluses, Oh King the disciples of the Dhammaraja, and have come from Jambudeepa (India) with compassion towards you”.

When the King heard those words he at once remembered the message he had received earlier from his unseen friend, the Indian Emperor Asoka about Buddhism. At once the King laid down his bow and arrow and exchanged greetings. Seeing the others standing behind the Mahinda Maha Thera, the King asked “when did they come?” And the reply was “with me” from Mahinda Maha Thera.

The Arahath Mahinda Thera put the King at ease and explained his mission. After asking the King Devanampiyatissa few questions, to test his knowledge and intelligence to ascertain whether he could understand the Dhamma, Arahath Mahinda realized that the King has the capacity of comprehending Buddhism. One of the intelligent questions is known as the Mango Quiz (‘Amba Panaya’)

The Mahinda Thero preached to the King the ‘Chulaattipadupama Suttra’. At the end of the discourse the King and his followers embraced the new faith.  It is said that many gods gathered to grace this historical occasion. 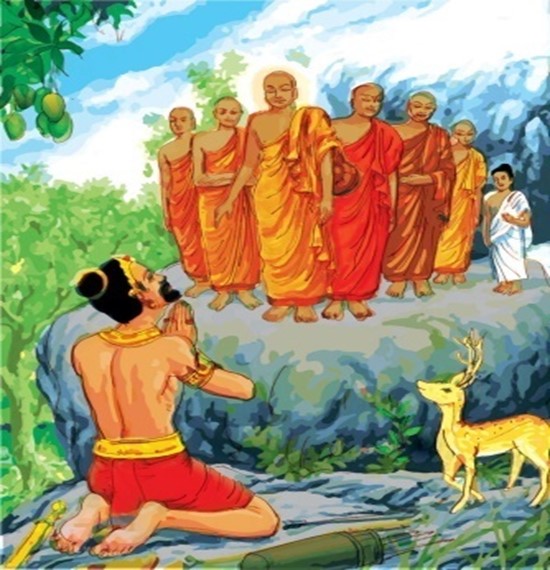 Queen Anula, King Tissa’s sister-in-law and the consort of an uparaja (Sub-king), with 500 of her attendant ladies, having listened to the discourses, gained mental attainments ‘Sotapana’. She requested Arahath Mahinda to grant them ordination. Venerable Arahath Mahinda helped in establishing the Order of the Nuns (Bhikhunisasana or Meheni Sasana) in Sri Lanka. The Mahinda Thera suggested to the King Tissa that his sister Sangamitta Therani in India, be invited to Sri Lanka to bestow ordination as a male monk was not permitted to ordain a female monk. Thus the Meheni Sasana was established in Sri Lanka.

The arrival of Arahath Mahinda created a new era in the country, a beginning of a new civilisation with its own identity. Arahath Mahinda brought not only pure Buddhism, but also unity and lasting socio- political and cultural revolution, changing the life and behaviour of the people for peace and tolerance. It was not only people, the animal kingdom also received peace as the king gave royal protection to all animals, since Arahath Mahinda emphasised to the King the sanctity of all living begins –same right to live as his citizens. As arahath Mahinda mentioned to King Devanampiya Thissa ‘You are not the owner of the country, but the ruler and the administrator only. You cannot take lives of any living being which lives on earth, in water or in the sky’.

Arahat Mahinda Thera founded the Order of the Sangha in the country. Relics of the Buddha were obtained from Emperor Asoka and they were enshrined at the Thupārāma Dagaba, the first of its kind to be built in the sacred city of Anuradhapura. There was a vast development of agriculture, irrigation works, social welfare work, arts and crafts in Sri Lanka. The offering of the ‘Mahā Meghavana’, the royal park to the Sangha by the king, was an important event, for it was there that the ‘Mahāvihāra’, the leading monastery and the centre of Buddhist education was established.

Arahath Mahinda is described as “the father of Sinhalese literature“ since he had translated and written commentary for the Tripitaka in Sinhala, turning it into a literary language. He was also credited with introducing the culture of the Mauryan Empire with its arts, crafts and architecture to the Island, Arahath Mahinda is known as ‘Anubudu’-The second Buddha by Buddhists for his contribution to Sri Lanka. Ven Mahinda propagated the Buddhism for 48 years. He passed away at the age of 80 in Mihintale.

Although Poson is celebrated throughout the island, the main centre of celebration is Mihintale, where Mahinda preached the first sermon to the king Devanampiyatissa.  Mass religious activities such as Sil campaigns, Bodhi Poojas, ‘Dansalas'(free food), Poson devotional songs, Poson ‘thoran’ (pandols) and lanterns. Pageants – Mihidu parahara – are organized on that day.

Since the introduction of Buddhism by Arahath Mahinda the Sinhala Kings governed the country based on ethics drawn from Buddhism (‘Dasa Raja Dhamma’ – The Ten Duties of Rulers) which includes non-violence, tolerance, respecting opinions of other persons that are essential for religious and ethnic harmony. Foreign invasions over the centuries failed to change the cultural and religious identity of the Sinhala Buddhist. Anyone who has embraced the Sri Lankan way of life would instinctively respect Buddhist values, regardless of ethnic or religious differences. It is through such an understanding that all communities in Sri Lanka can live in peace and harmony. 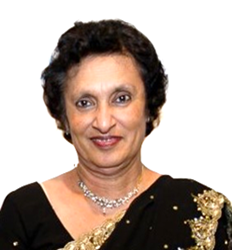 Mrs. Shanti Senadeera is an Early Childhood Graduate Teacher, with many years experience in Sri Lanka, Nigeria and Australia. She was a teacher at North Parramatta Dhamma School and also at North Parramatta Sinhala in Sydney. She has written a book titled ‘Developing Mindfulness in Young Children’ published by an international publisher in Taiwan.