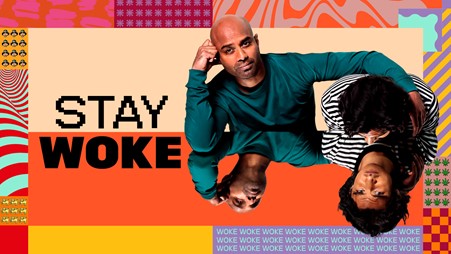 Opening in Melbourne last month to critical and public acclaim, this new comedy stars Green Room Award-winning Dushan Phillips as Niv and newcomer Kaivu Suvarna as his younger brother Sai. Niv has gone vegan and is madly in love with Mae, who identifies as non-binary and is played by Brooke Lee. He’s starting his own business and seems to have finally found himself after years as the black sheep of the family. In an attempt to bury the hatchet on a lifelong rivalry, Niv invites golden child Sai and his new girlfriend Kate, played by Rose Adams, on a ski trip so they can put the past aside for the sake of family. As the party banter turns political, Kate stumbles into a minefield and finds herself the focal point of an all-out war.

Director and Malthouse Theatre Artist in Residence, Bridget Balodis, says, “Stay Woke is so contemporary in its references and so fearless in its desire to tackle issues like white fragility, weaponised wokeness, and cultural appropriation.”

“In rehearsals I kept thinking about comedians like Alok Vaid-Menon and Hannah Gadsby – it’s a knife’s edge comedy, and even though the play has a big heart, no one is safe from scrutiny.”

The play’s context has its roots in the Sri Lankan Civil War between 1983 to 2009 and the Tamil Sri Lankan migrant experience in Australia. Writer Aran Thangaratnam says, “To me Niv and Sai’s perspective on Sri Lanka would be a conflicted one, feeling a reactive allegiance to Sri Lanka growing up, due to the other-ism of growing up in Australia, but also knowing that it’s a country that has historically rejected people like them through the civil war.”

Thangaratnam was a participant in Malthouse Theatre’s Malcolm Robertson Writers’ Program in 2020, which commissions two early career playwrights each year to write a full-length play.

Darlinghurst Theatre Company’s Artistic Director, Amylia Harris, is excited to be presenting this new work to Sydney audiences. “The term ‘woke’ is ubiquitous and often appropriated without any real understanding of its roots in the mid-20th century African American vernacular. This comedy will hopefully not only make people laugh, but also challenge audiences to self-reflect on their own progressive politics and intersectional identities.”

Harris adds, “It’s very exciting to begin the first of our two collaborations with Melbourne’s Malthouse Theatre this year. In July, Malthouse is presenting seven methods of killing kylie jenner – our hugely successful co-production with Green Door Theatre Company. As we take more and more works like these around the country, we continue our work to transform national stages into truly inclusive spaces. I see joy as an act of resistance, and comedies like these can promote resilience and break down barriers. That really excites me as a theatre maker.”

Malthouse Theatre’s production of Stay Woke is being presented by Darlinghurst Theatre Company at the Eternity Playhouse in Sydney until 17 April. For more information and bookings please visit: https://www.darlinghursttheatre.com/staywoke